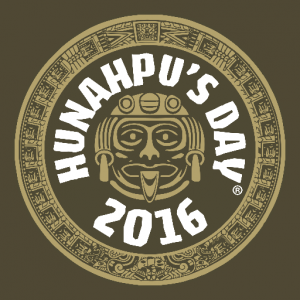 B. Nektar will be joining our friends Cigar City Brewing in Tampa to celebrate Hunahpu’s Day, March 12, 2016.  We love attending this party with our pals, and it doesn’t hurt that we get to travel the Florida from chilly Michigan.  It’s really tough for us to leave this cold weather, ya know.  We are stoked to be serving up some new flavors to everyone.  Take a look at what’s on tap!

NecroMangoCon Aged in Valentine Gin Barrels- Our NecroMangoCon is a fan favorite and what better than team up with our hometown friends at Valentine Distilling and throw some of this mango and black pepper flavor into their Gin barrels.

Stupid Man Suit – Originally named ‘Dark Fruit Cider’ we have taken this hard cider with Balaton Cherry, Raspberries and Black Currant to new levels with branding it based off of one of our favorite movies, Donnie Darko.  Stupid Man Suit is set to release to the public in April, so get yourself a taste at the party!

Tuco-Style Freakout – Inspired from our Agave Lime mead, this one is sure to give Heisenberg a run for his money because this shit is tight, tight, tight!  Oh and did we mention that it won the Best In Show at the 2015 Michigan Mead Cup? Well, yeah, it did. YEAH B!

Vanilla Cinnamon Cyser – Specially made for the party, we have use Michigan apple cider, Orange blossom honey, Tahitian and Madagascar vanilla with Ceylon and Cassia cinnamon combined to make a warming but refreshing beverage with all flavors in nice balance.