Roughly translated, this phrase means “a mead to hold onto”. The Miel De Garde series represents the truly stellar, exceptional products created here at B. Nektar. Read on for more about the series and our latest release!

On 8/3/2017, we’re releasing our 3rd offering in the series: Double Whiskey Barrel Aged Episode 13, a variation on a familiar staple and popular high-end release, Episode 13. Will it be collectible? You betcha! Will it be tasty as all heck? Well, yeah!

Curious about Miel De Garde 1 and 2? Well, we’re glad you asked- allow us to explain.

The first Miel De Garde was called… Miel De Garde. It was (we say “was”, ’cause we’re not sure if any exists in the wild any longer) a finely crafted mead made with the highest quality orange blossom honey, then aged in oak barrels for a year and a half. At 1,999 bottles produced, it remains the largest batch in the series thus far. 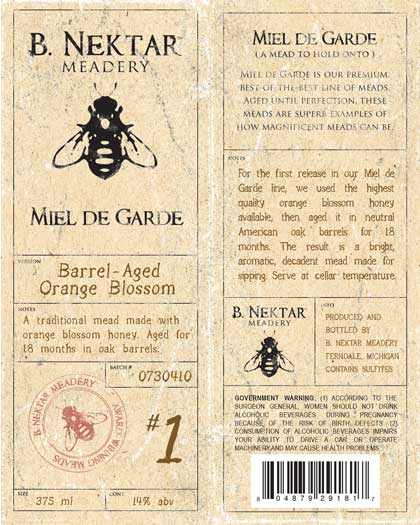 Available only to B. Nektar’s Royal Jelly Bottle Club*, Miel De Garde #2 was a double barrel aged Apple Pi with Crust mead. A staggering 61 bottles were produced, and each was adorned with hand-drawn labels. Rare and very darned tasty, if we do say so ourselves! Check out a sampling of some of the labels:

*Curious about how YOU can become a member of The RJBC? Click this special link and all of your wildest fantasies will come true.